Zayn Malik didn’t hold back in a new tell-all interview with ‘British Vogue’ magazine when he shockingly admitted that he doesn’t keep in touch with any of his former One Direction bandmates.

Zayn Malik, 25, isn’t in touch with his former One Direction bandmates and it turns out he hasn’t been for quite some time. The now solo singer admitted that things fell apart between him and the British/Irish lads before he even left the band back in 2015, in a new interview with British Vogue magazine. “I ain’t spoke to any of them for a long time, to be honest with you,” he said in the Dec. issue of the publication. “That’s just the way it is. There’s things that happen and things that were said after I left. Snide things. Small things that I would never have expected.” 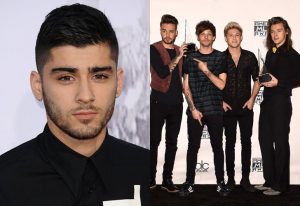 Although Zayn said the relationships with him and Harry Styles, 24, Louis Tomlinson, 26, Niall Horan, 25, and Liam Payne, 25, had “broken apart”, he also explained that his personality could have been one of the reasons for it. “I have always been a bit like that, though – always a bit of an island,” he admitted. “I don’t like to confer with too many people.” The “Pillow Talk” crooner went on to talk about how the enormity of being in a hugely popular boy band at the time made things difficult for him. “We went from theatres, to arenas, to stadiums – there was never any sort of bridge between. Just boom, boom, boom,” he said. “I guess that kind of progression to any mind – but especially when you’re 17, 18 – it kind of affects you a little bit. People take it different ways – especially when there are five different personalities. The relationships had broken apart. That’s just the way it is. People move on, people grow apart, people grow up.”

Zayn’s hard times with and without One Direction have often made headlines. He has openly suffered from anxiety issues that sometimes stopped him from going on stage in front of thousands and he almost got eliminated from The X-Factor back in 2010 for initially refusing to dance in the bootcamp round. Zayn may have seemed like the most reluctant member of One Direction from the start and he was the first to leave, but the remaining four members also went on to pursue their own successful solo singing careers after going on a hiatus in 2016. It’s unknown whether or not they will reunite in the future but if they do, it seems like Zayn most likely won’t be a part of it.

SEE ALSO: Nicky Minaj ‘Never Slept With Quavo’: She Only Spent Time With Him to ‘Make Cardi B Mad’