“They each got a tattoo,” Bang Bang, whose real name is Keith McCurdy told Page Six TV in a story posted on Friday, November 2. “Justin’s tattoo is on his face, and I haven’t seen any photos of it — so he’s doing a good job of laying low.”

McCurdy revealed that the tatt is next to Bieber’s eyebrow and includes “little words.” A photo of the singer taken in July shows what appears to be a word inscribed above the singer’s right eyebrow. There’s speculation that the word inscribed is “Grace.” 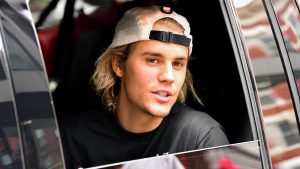 “It’s really thin and delicate,” the artist said. “And [it’s] also not a traditional couples’ tattoo.” 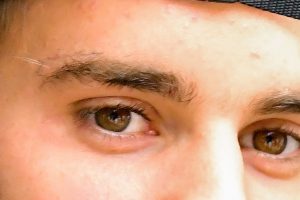 t’s not the first ink the Canadian crooner has gotten on his face — in May 2016 tattoo artist Jonboy put a tiny cross near the corner of Bieber’s eye. “It represents his journey in finding purpose with God,” Jonboy said

In an interview with GQ in 2016, the “What Do You Mean?” singer said he would consider getting a face tattoo when he’s “really old, not super old, but maybe, like forties or fifties or something.”

“I think if they’re done right, they could be cool,” he added, “but nothing supercrazy all over the face.”
Relive Their Love! A Timeline of Justin Bieber and Hailey Baldwin’s Relationship

As previously reported, Bieber and Baldwin tied the knot in an NYC courthouse in September. The couple, who dated on and off between 2015 and 2017, got engaged in July.

SEE ALSO: The Weeknd and Bella Hadid Spotted “Making Out Like Crazy” at Halloween Party