The Weeknd and Bella Hadid came to play on Halloween night.

We’re told that once these two went inside, they couldn’t help but display some serious PDA.

“They were in a booth with other people but basically had their arms wrapped around each other and were making out like crazy,” an eyewitness shared with E! News. “They were holding each other and kissing often.” 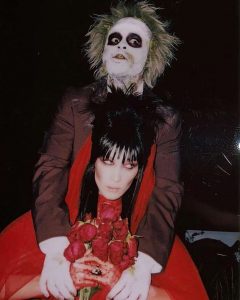 Later in the night, our eyewitness saw the pair dancing on the dance floor that was filled with familiar faces including Ice-T and Coco, Padma Lakshmi, Dylan Sprouse and more stars.

While these two appeared to have plenty of fun inside, the rapper and supermodel also enjoyed taking pictures as Beetlejuice and Lydia for the gram.

As for the clothes, The Weeknd wore a vintage Pierre Cardin suit and vintage Stacy Adams shoes while Bella opted for a one of a kind Maestro Couture red dress.

While these two deserve plenty of credit for their looks, hostess Heidi and boyfriend Tom Kaulitz didn’t disappoint with their costumes. The pair transformed into Shrek and Princess Fiona from the popular animated movie.

In other words, couples ruled at this bash!