Taylor Swift used her acceptance speech for artist of the year at the American Music Awards on Tuesday night to encourage her fans to vote.
“This award and every single award given out tonight were voted on by the people, and you know what else is voted on by the people?” Swift asked the audience. “It is the midterm elections on November 6. Get out and vote. I love you guys.”taylor swift
Swift had announced Sunday on Instagram that she would be voting for Democratic candidates in her home state of Tennessee in the elections and called on her fans to register and vote. The post has been liked nearly 2 million times. 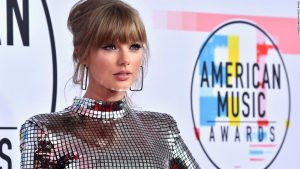 Earlier in the show, comedian Billy Eichner had referenced Swift’s post.
“Young people of America, the biggest election of our life is happening,” Eichner said. “Go to vote.gov like Taylor Swift told you to.”
Swift had actually encouraged her fans to go to vote.org, a nonpartisan website.

Host Tracee Ellis Ross also showed her support for voting, wearing an “I Am A Voter” shirt. Ross also wore other clothing by black designers. She had told Billboard earlier this week that she was “so grateful” for Swift’s comments.
On Tuesday, President Donald Trump said he liked Swift’s music “about 25% less now” because she was supporting Democrats.