The Russian republic of Dagestan reportedly canceled the premiere of a BTS concert documentary in an attempt to warn citizens against “Korean homosexuals.”

“Guardians of morality” in Makhachkala, the republic’s capital city, boycotted “BTS World Tour: Love Yourself in Seoul” on social media, with one group calling it an “outrage” in an Instagram post. Threats to anyone who goes to the cinema also surfaced. 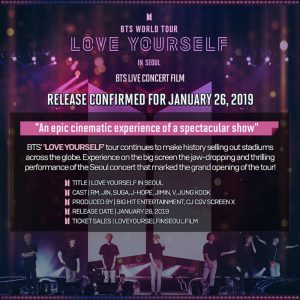 Cinema Hall, a major movie theater in the city, ended ticket sales a day after they started selling, Kommersant reported.

“Even if these threats were not going to be taken out of social networks, we believe that the cinema’s management decided not to risk it,” a Russian BTS fan club admin told the outlet. “It’s a pity for Dagestan fans who have lost the opportunity to realize their dreams.” 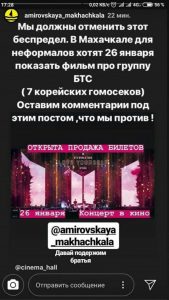 While Dagestan — a Muslim-majority republic — canceled the film, scores of Russian cities will play it on Jan. 26, 2019 like other parts of the world, including the U.S.

As a result, local BTS fans can only watch the movie elsewhere, such as the neighboring city of Grozny, Chechnya.

Cinema Hall started selling tickets on Dec. 20 after 800 fans petitioned for its screening, according to The Moscow Times.

“My friends and I will go to Grozny for the film. We have about 10 people gathered and we have already bought tickets on the internet,” said a 16-year-old fan, who described the cancellation as “the most stupid nonsense.”