Lady Gaga is engaged to her beau, Hollywood agent Christian Carino, the Star Is Born actress confirmed herself. Nearly a year since engagement rumors first sparked last November, the triple threat thanked her “fiancé Christian” during her emotional and empowering speech at Elle’s 25th Annual Women in Hollywood Celebration in Los Angeles on Monday.

While it’s unclear exactly when the big question was popped, Gaga has been wearing a sparkler on her left-hand ring finger for months now, fueling the speculation that she was indeed an engaged Lady. 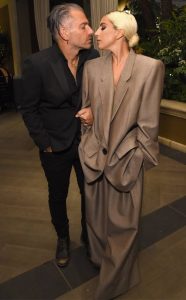 Despite her immense stardom and high-profile life, the couple have managed to keep their romance relatively low-key save for the occasional joint public appearance.

As loyal fans know, the 31-year-old and her ex Taylor Kinney broke off their engagement in July 2016, more than a year after the Chicago Fire star’s proposal on Valentine’s Day in 2015.

More than six months after the split, Gaga was spotted canoodling with Carino on the field at the 2017 Super Bowl in early February and the low-key couple has been going strong ever since. Gaga’s man helped her ring in her 31st birthday, took their romance to the Hamptons that summer, and a few months after, the star dropped the “L” word on her fans.

“When I went backstage, Christian was by the stairs making sure I was OK,” the songstress said during a rainy concert in September 2017, as reported by Page Six. “The best part about being in love with someone is having them there to catch you if you fall.”

Clearly, Mother Monster has fallen in love—and she’s going to tie the knot. Congratulations, you two!