Karlie Kloss is a married woman.

But is she also a scorned friend?

The 26-year-old supermodel exchanged vows this week with her 33-year-old businessman boyfriend, Joshua Kushner, sharing a photo from the couple’s special day on social media.

A represenative for the stars has confirmed to People Magazine that Kloss and Kushner held a small, Jewish ceremony in upstate New York on Thursday, with fewer than 80 people in attendance.

(They will also host a larger celebration for friends and loved ones some time this spring.) 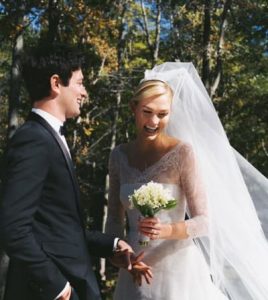 The Project Runway host donned a custom Dior gown for the ceremony and was “beaming with happiness,” claims a friend who was in attendance.

But this friend was NOT Taylor Swift.

Swift was not at her close friend’s wedding, raising many questions among fans who have been wondering if these two are still close.

Kloss’ new husband, it ought to be noted, is the brother of Jared Kushner.

Jared Kushner is married to Ivanka Trump, who is the daughter of President Donald Trump.

President Donald Trump is an evil, mentally imbalanced human being who is feuding with Swift due to the latter’s endorsement of two Democratic candidates in Tennessee.

So, it’s only natural to wonder whether Kloss’ connection to the Kushner family has caused a rift in her friendship with Swift.

Heck, maybe Swift was afraid a member of the Trump family would actually be in attendance at the ceremony.

It turns out that Taylor was simply in Australia on Thursday, as she noted herself on Instagram.

This trip was likely planned for several weeks, if not months, in advance, but we still can’t help but speculate over why she couldn’t cancel the visit in order to attend Kloss’ wedding.

Something does seem to be amiss here.

Kushner proposed back in July with a high-carat cushion cut diamond in a platinum solitaire setting with a diamond pavé band.

As you can see above, Kloss was not shy about showing the rock off at the time.

But she also said some nice things about Kushner, focusing on who he is as a person more than just the diamond he could afford to get for her.

“I love you more than I have words to express,” Karlie wrote this summer as a caption to the picture immediately above.

“Josh, you’re my best friend and my soulmate. I can’t wait for forever together. Yes a million times over.”

In September, Kloss opened up about her engagement a bit more, telling Vogue:

“The proposal was romantic and sweet. We spent the weekend in upstate New York, just the two of us.”

Congratulations to the newlyweds!

But not to Karlie’s new brother-in-law.

That guy sucks so very much.