Hailey Baldwin and Justin Bieber already got married at a courthouse this September, BUT it looks like they’re back at it for round two. The newlyweds are reportedly getting married again in a bigger blow-out ceremony, and while previous reports stated the wedding would take place this coming February, TMZ has some new info.

According to the outlet, Hailey and Justin will marry in Los Angeles on March 1 (not February 28 as previously reported) and the ceremony will coincide with Bieber’s next birthday because apparently he wants to be a “married man” by the time he’s 25. Sure, why not! 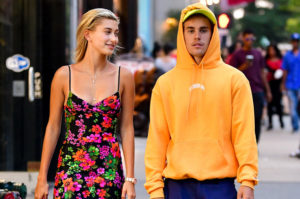 The wedding is said to be a “religious affair,” and the guest list sounds like it’s going to be full of A listers, including Kylie Jenner and Travis Scott, who already got a Save the Date email.

Interestingly, TMZ’s report makes it sound like Hailey and Justin have moved the date of their wedding a total of three times, because this is the third batch of Save the Dates they’ve sent out. On that note, mark your cals! But use a pencil.

SEE ALSO:French Montana clears the air about his RKelly comments following backlash: “My heart is with the victims.”