Forbes has just released its list of America’s Wealthiest Celebs, with the Kylie Cosmetics founder making the top five! Leading the list is George Lucas with a net worth $5.4 billion, Steven Spielberg with $3.7 billion, Oprah Winfrey with $2.8 billion, and Michael Jordan with $1.7 billion.

In the fifth spot is Jenner, who owns 100 percent of her Kylie Cosmetics company. Forbes reports that Jenner has a net worth $900 million and is on track to become the youngest self-made billionaire.

Jay-Z also has a $900 net worth, with David Copperfield close behind with $875 million. Taking the number eight spot is Diddy, who has a net worth of $825 million.
Tiger Woods and James Patterson, who both have a net worth of $800 million, round out the top 10 list. 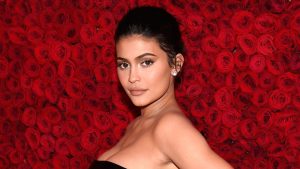 It was just months ago that Jenner graced the cover of Forbes’ “Richest Self-Made Women” issue. The Keeping Up With the Kardashians star took the No. 27 spot on the list.

“Social media is an amazing platform,” Jenner told Forbes. “I have such easy access to my fans and my customers.”

“I struggled for a minute with finding something to do on my own,” went on to tell the publication. “Ever since I was in sixth grade, I would wear purple eye shadow. I turned to makeup to help me feel more confident.”