Kim Kardashian can’t spend all her waking moments responding to stories that aren’t true, but sometimes the fibs grow legs and spread so far and wide that she must address them. So the Keeping Up with the Kardashians mom finally had to say something about a story in British tabloid The Sun that claimed her long-ago ex Ray J (with whom she made a sex tape) revealed some very personal details about their sex life. 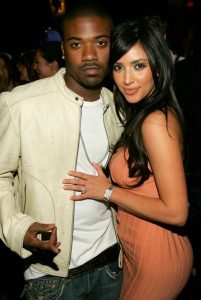 “Kim and I had fun times — marathon sessions,” The Sun claimed he told clubgoers in London. “But she didn’t like getting sweaty and would stop to do her make-up if she did. She liked to look dope during sex, the right lighting, setting the mood. She was wild — there was a red Louis Vuitton trunk of sex toys.”

“Ray J constantly revealing all these intimate details about @KimKardashian shows that he is suffering from low self esteem!” one Twitter user wrote in response to the story, to which Kim actually responded: “Or shows he’s a pathological liar. You actually believe this story? It’s too funny to me!”

RayJ constantly revealing all these intimate details about @KimKardashian shows that he is suffering from low self esteem! Hoping that Kanye ignores his ass

You know what, Kim? You may still think Ray J is a pathological liar for other reasons, but we don’t believe this obviously-not-rock-solid story, either. And that’s not just because new father Ray J probably isn’t talking like this in a London club, but because of this rather sus line from The Sun writer: “During a wild 12-hour party session, he also told revellers about Kim’s wild spending habits – claiming she racked up around $100,000 on ‘floss’ – the American term for thongs.”

Kim Kardashian is definitely flossin’, but floss? C’mon, someone made this up.

Personal Space is Bravo’s home for all things “relationships,” from romance to friendships to family to co-workers.

SEE ALSO: Zayn Malik Blasts His Former One Direction Bandmates: I’ve Cut All Ties With Them