Cardi B has announced her split from husband Offset in an Instagram post Wednesday morning. The post, which included the caption “There you go..peace and love,” detailed the couple’s decision to call it quits. 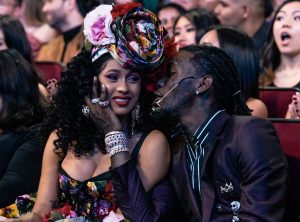 “So everybody been bugging me and everything,” Cardi said in the video. “And you know, I been trying to work things out with my baby father for a hot minute now. And we’re really good friends and you know we’re really good business partners and you know, he’s always somebody that I run to, to talk to and we got a lot of love for each other, but things just haven’t been working out between us for a long time.”

There you go..peace and love

She also confirmed that the split is amicable and was mutually agreed upon. “It’s nobody’s fault,” the rapper continued. “It’s just like, I guess we grew out of love. But we’re not together anymore. I don’t know, it might take time to get a divorce. And I’m going to always have a lot of love for him because he is my daughter’s father and yeah.”

The couple, parents to daughter Kulture Kiari Cephus, secretly married last September in Atlanta. The relationship has been public since early 2017, but the marriage wasn’t confirmed by the pair until this past summer. Offset responded to the rapper’s Instagram post with the comment: “Y’all won.”