Cardi B and Bruno Mars got another one in the bag.

Following their hit remix to “Finesse,” Cardi is reportedly set to drop another collaboration with Mars

The track supposedly features another big artist and is slated to arrive Jan. 25, but it could be pushed back due to Cardi’s schedule. The “Bodak Yellow” rapper and Mars are scheduled to perform together as part of the Bud Light Super Bowl Music Fest during Super Bowl weekend in Atlanta on Feb. 2.

It’s unclear where their new collaboration will appear. Cardi was planning to release a deluxe edition of her debut album Invasion of Privacy this month, which would include her single “Money” and new song “Press,” but her plans may have changed. 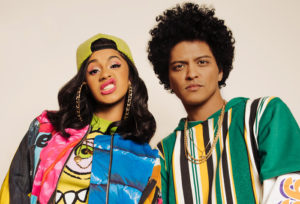 While speaking to fans on Instagram Live, Cardi said she hopes to release her next album around the anniversary of Invasion of Privacy, which dropped April 5, 2018. “Of course there’s gonna be an album in 2019,” she said. “Hopefully I could get my album done around the same time that Invasion of Privacy came out, but I don’t know how possible that’s gonna be ’cause I feel like I’m gonna be extremely, extremely busy.”

The song follows their 2018 collaboration “Finesse (Remix),” which peaked at No. 3 on the Billboard Hot 100. Cardi was set to join Bruno on his “24K Magic World Tour” last fall, but dropped out following the birth of her daughter Kulture in July.

“I have to do what’s best for myself and my baby!” she said at the time. “Thank you Bruno for being so supportive and understanding.”

In response, Mars shared his support for Cardi. “Most important thing is you and your family’s health,” he said. “I also know we’ll share the stage when the time is right.”