Camila Cabello has opened up about her relationship with Matthew Hussey and has revealed that she still gets an extra flurry of nerves when she knows he’s in the crowd at one of her concerts.

The 21-year-old met the dating coach back in February 2018 when they both made separate appearances on the Today show, and they’ve since jetted off on holiday together, been papped in the street, and fended off their fair share of pregnancy rumours.

In an interview with Marie Claire, the singer gushed over their romance: “He’s so similar to me,” she says. “In person, we’re just weird and silly and stupid together. He makes me the happiest I’ve ever been in my life.”

As for how she handles spotting him in the crowd, Camila admitted: “Any time he’s there, I get super nervous. I stutter or my hands are shaky,” she said.

“It’s annoying, because we’ve been together for kind of like a long time now, but every time, I’m like, ‘Oh my God, I have to talk now.'” 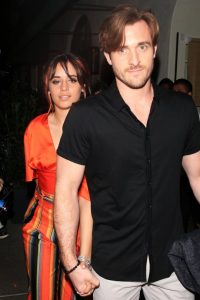 “Basically, there’s the me that I really am, on the inside, which is the nerdy one—the kind of introverted, shy one—and then there’s the sexy, overly confident one, doing great dance moves and being super sassy,” she said.

The good news is that Camila’s nearest and dearest are about as invested in her relationship with Matthew as we are (read: a lot) with the singer revealing that she’s “super attached” to her family and that she’s happy they’ve accepted him into the fold.