They’re in love and they don’t care who knows it! Travis Scott referred to Kylie Jenner as his “wifey” after she gushed over him on Instagram on Saturday, November 17.

“Only the people around you really know how hard you work,” the 21-year-old makeup mogul captioned a series of pictures of Scott doting on their 9-month-old daughter, Stormi. “I love to watch you make all your dreams come true. your first festival. we’re so proud of you. we love you.”

The 26-year-old “Goosebumps” rapper simply replied ”I love u wifey,” in the comment section of Jenner’s post.

only the people around you really know how hard you work. i love to watch you make all your dreams come true. your first festival. we’re so proud of you. we love you 🖤

Earlier that night, Scott doubled down on the nickname while performing in Houston, Texas at his Astroworld festival. “My beautiful wife, she came out,” he said as the crowd erupted in cheers Opens a New Window. . “My beautiful daughter, she’s here too.”

Jenner and Scott sparked engagement speculation in early November after the Keeping Up With the Kardashians star revealed a house full of red roses Scott had gifted to her, leading fans to think it was due to a proposal.
Though Jenner and Scott haven’t made any engagement or marriage announcements, it’s not the first time they’ve referred to each other as “hubby” and “wifey”: Following the rapper’s Saturday Night Live performance in October, the reality star shared a photo of him onstage adding the moniker. 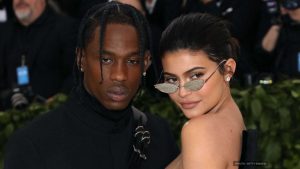 The couple — who began dating in April 2017 and welcomed their first child together in February — aren’t letting their fame alter the way they’re parenting their baby girl.

“They are really good, normal parents,” a source close to Jenner and Scott told Us Weekly earlier this month. “Even though they have flashy lives themselves, they are trying to bring Stormi up to be as normal as possible.”

Another insider told Us in October that the pair are eager to grow their family and are “actively trying for another” baby. Jenner opened up about the dad-and-daughter duo’s bond in a social media post that same month.

“She is obsessed with her dad,” Kylie shared while doing an Instagram Q & A. “They have this crazy connection, and she’s definitely a daddy’s girl, it is cute to watch. When Dad’s around, I’m not even there, it’s like she doesn’t even see me, but it’s cool, whatever.”