She may be Mrs. Bieber to you now, but for a hot second, Hailey Baldwin could’ve been Mrs. Mendes … in some alternate reality where Shawn Mendes didn’t blow it. While Mendes has long stuck to his script that he and Baldwin were just “awesome friends” who leaned on each other for moral support at this year’s Met Gala, he’s now admitting that they had a bit more of a situationship. “I don’t even wanna put a title on it. I think it was more of a zone of limbo,” he tells Rolling Stone for its latest cover. Then in swooped Justin Bieber, Baldwin’s now-husband. Mendes says he happily texted Baldwin congrats on her marriage but remains haunted by what if: “I think I’m an idiot to not, you know … But you can’t control your heart.” 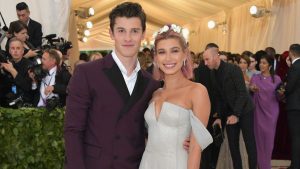 And if that story is not enough to convince you he’s just a regular shmegular straight male prototype, don’t worry, there’s much more. Responding once again to speculation about his sexuality, Mendes is here to disappoint the gays. “In the back of my heart, I feel like I need to go be seen with someone — like a girl — in public, to prove to people that I’m not gay,” he says. “Even though in my heart I know that it’s not a bad thing. There’s still a piece of me that thinks that. And I hate that side of me.” That side of him, he says, has pushed him to actively avoid seeming gay, even changing the way he sits after watching back interviews and reading comments criticizing him for being effeminate. He recalls waking up in a cold sweat after approving a video Taylor Swift posted of her putting glitter eye shadow on him backstage. But he makes it clear that he’s not embarrassed: “Maybe I am a little more feminine — but that’s the way it is. That’s why I am me.”