On New Year’s Eve, Pete Davidson performed at the Chevalier Theatre just outside of Boston in Medford, Massachusetts. According to us, a source told us  that he discussed everything from his breakup with Ariana Grande to his thoughts on her single, “Thank U, Next,” which she released just minutes before an episode of Saturday Night Live began.

“Here’s the thing about the breakup song. Usually breakup songs, you know who it’s about, but you don’t really know. That G named all of us. Bam. She named all of us. And then, tells us, ‘Yeah, he has a big dick,’” Davidson sais. “That shit came out before I had to put on a fucking duck hat and be like, ‘Derrrp here’s the pizza!’ So all my friends were there. It was a sad day. We didn’t know it was going to happen.” 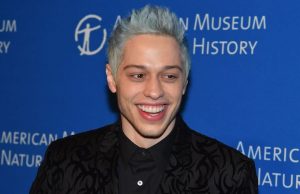 Davidson also reportedly joked about Louis C.K, and his take on the offensive comedian actually made us LOL.

“I got a Harry Potter tattoo. Then the next day Alan Rickman, the guy who played Snape, died, and I was like, ‘Oh, what a weird coincidence,'” Davidson began, E! Online reports. “Then I got a Willy Wonka tattoo. Next day—Gene Wilder dies. Now I’m like, ‘Alright, that’s a coincidence, that’s weird.’ So I’m thinking of getting a tattoo of Louis C.K., what do you guys think?”

Oh, and here’s the kicker: “That joke used to be about Aziz Ansari, but Aziz has been nice to me recently,” Davidson reportedly added for good measure.

There is nothing—NOTHING—funny about using homophobic language and joking about school shooting survivors. But sometimes, comedy is just the thing to help us heal. Thanks for the laugh, Pete