In a time when going Instagram Official is a whole thing, nothing says eternal commitment like changing your name on social and Hailey Baldwin is screaming “eternal commitment” for all of ‘gram to hear.

The model made her marriage to Justin Bieber Insta Offish this week, changing her display name and her actual @ handle both to Hailey Bieber. This is for real, guys.

Justin and Hailey got engaged over the summer shortly after rekindling their romance (they first met in 2009 and have reportedly dated off and on since 2014). In September, reports that the couple had wed in a quiet civil ceremony broke, but neither Justin nor Hailey confirmed or denied the rumors.

Then, this week, they both took steps to make their marital status known to the entire social media-loving world. On Friday, Justin shared what appears to be a paparazzi picture of him and Hailey, strolling along, laughing, and generally looking all kinds of loved up. In the photo, Hailey grabs Justin’s wrist with her left hand (perfectly showing off her ginormous, big-enough-to-have-its-own-gravitational-pull engagement ring) and grasps his fingers with her right hand. Justin and Hailey both look so in love in the photo, which Justin captioned, “My wife is awesome.”

My wife is awesome

Hailey, of course, made things official herself with her big name change: 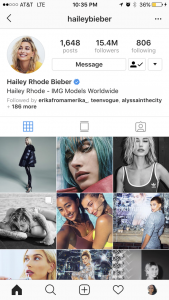 Justin kept the sexy newlywed love vibes going by commenting on Hailey’s most recent Instagram picture, which features her modeling her favorite Nicole Benisti coat, a $2,900 Montaigne Shearling Puffer Jacket. and Justin’s comments for posterity. “Ur just too much,” the singer wrote, adding, “U turn me on.”

Back again as the face of @nicolebenisti wearing my favorite coat 🖤