Quavo ignited rumors when he said he slept with Nicki Minaj on his latest track ‘Huncho Dreams’ — but is it true? We’ve got the scoop!

Quavo, 27, who is one third of the hip-hop trio Migos, clapped back at Nicki Minaj, 35, with his debut solo album, Quavo Huncho. The rapper insinuated that he had a fling with Nicki in a track entitled, “Huncho Dreams,” after she took aim at him in her hit, “Barbie Dreams.” Rumors started swirling that the twosome had slept together after Quavo’s controversial lyrics said, “She said I hurt her feelings 52 times (Two) / Call up queen (Nicki) / The queen can’t flex on a young bull (Flex) / Made her scream (Scream) / Chanel, I bought her two of ’em / You can check IG (Hey, IG) / ‘Cause when she post, it go up.” However, a source close to the Trinidad-born beauty EXCLUSIVELY tells us that the intimate encounter never happened and Nicki just wanted to hang out with Quavo to make her rap rival, Cardi B, mad! 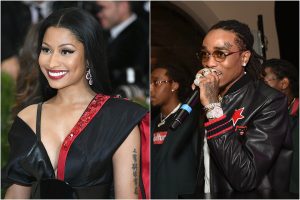 The insider explained to us that the “Anaconda” hit-maker just spent time with Quavo, but, “never slept with him and just wanted to use Quavo to make Cardi mad.” Nicki and Cardi’s feud is no secret, so it’s no wonder she may have used the Migos rapper, who is joined by Cardi’s man, Offset, to get back at her rival. “Rappers like Quavo can’t get women like Nicki and they have to settle for Instagram thots,” the pal added. Nicki, who has been previously linked to Meek Mill and Safaree Samuels, apparently learned her lesson after their tumultuous breakups. “After dating Meek, and after everything she went through with Safaree, Nicki vowed not to mess with rappers or guys in the industry again because they are messy and she knows they’ll spill secrets of their relationship.”

“Nicki doesn’t want to settle for someone who isn’t as successful as her, and she knows Quavo and a lot of these rappers are in record deals that will eventually leave them broke,” the source revealed. “She is too smart and knows better than to mess with Quavo.” The Grammy nominee clearly ruffled Quavo’s feathers after she spilled the tea in her smash hit, “Barbie Dreams.” Nicki spit on the track, “Somebody go and make sure Karrueche okay, though / I heard she think I’m tryna give the coochie to Quavo / They always wanna beat it up, goon up the p—y / Man, maybe I should let him auto-tune up the p—y.”