Johnny Depp recently opened up about his contentious casting as wizard Gellert Grindelwald in the upcoming Fantastic Beasts: The Crimes of Grindelwald. Talking about his presence in the third instalment of the film, Depp said that he enjoyed portraying the “fascist” character as a sensitive, concerned yet manipulative and powerful wizard”.

Depp’s casting came under severe criticism after his ex-wife Amber Heard accused the actor of being emotionally and physically abusive towards her.

In an interview with Entertainment Weekly, the 55-year-old actor said he was “falsely accused” and Rowling understood him.

“I’ll be honest with you, I felt bad for J.K. having to field all these various feelings from people out there. I felt bad that she had to take that. But ultimately, there is real controversy,” Depp said. 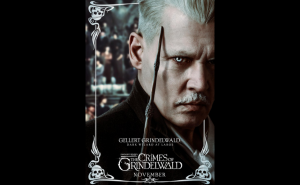 “The fact remains I was falsely accused, which is why I’m suing The Sun newspaper for defamation for repeating false accusations. JK has seen the evidence and therefore knows I was falsely accused, and that’s why she has publicly supported me. She doesn’t take things lightly. She would not stand up if she didn’t know the truth. So that’s really it,” he added.

Talking about how Depp came to bag the role, he said “it came out of nowhere”. After a long conversation with few directors, producers and JK Rowling herself, the actor came to have a comprehensive idea about Grindelwald’s character. The actor says he was taken aback when Rowling bestowed Depp with full control of Grindelwald’s portrayal, as it meant that the author had complete faith in Depp.

He added, “Grindelwald is an interesting character. His intentions in his mind are for the greater good, but there have been other people in world politics and such who felt the same way. He’s very dedicated to his beliefs. He’s not a fun character; he’s not funny.”

read this: Selena Gomez is taking control of her mental health