Demi Lovato is taking a stand against a sexist, body-shaming game that popped up on her Instagram feed.

‘Just called out Instagram and some bull**** game on my insta stories.. go check it out,’ the 26-year-old singer said on Twitter. ‘Always speak up for what you believe in!’

She even got props for speaking her mind from Kim Kardashian, who retweeted the singer’s message.

Her Instagram story reveals an ad for the game, which describes one character as ‘obese’ while a skinnier character is described as ‘pretty.’ 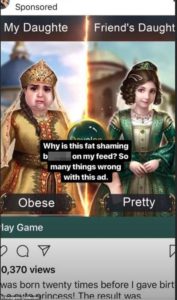 ‘So please Instagram, keep this b******* off mine and other’s feeds who could be easily effected by this disgusting advertisement,’ Lovato said.

‘With how aware people are becoming of mental health and mental illness, I expect you guys to know better by allowing this advertisement to be allowed on your app.’

‘And shame on the game,’ she concluded. 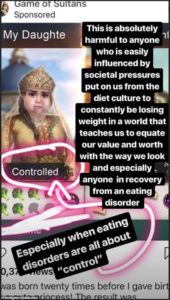 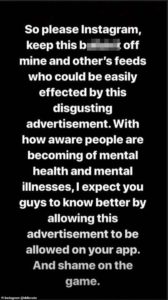 Instagram has since removed the add with a statement saying: ‘We’re sorry. This ad was approved by mistake. We reviewed it again and removed it from future delivery in people’s feeds,’ according to TMZ.

Meanwhile, Lovato was recently spotted on a winter vacation in Aspen with her new beau Henri Levy, who she’s reportedly falling ‘head over heels’ for.

She also recently took to her Instagram story with a message of gratitude for the fans who have stuck by her.

‘So grateful for the lessons I’ve learned this year,’ she said. ‘I will never take another day in life for granted, even the bad ones. Thankful for my fans, friends, family and everyone who supported me through this year.’